In May 2018 I conducted a review of all my DNA matches on Ancestry and recorded whether the match had a public or private tree, and whether a tree was linked to their DNA.

The headline numbers are: 40% of my matches have a public linked tree and 27% have at least one public unlinked tree. 7% have only a private tree. 26% had no tree at all. 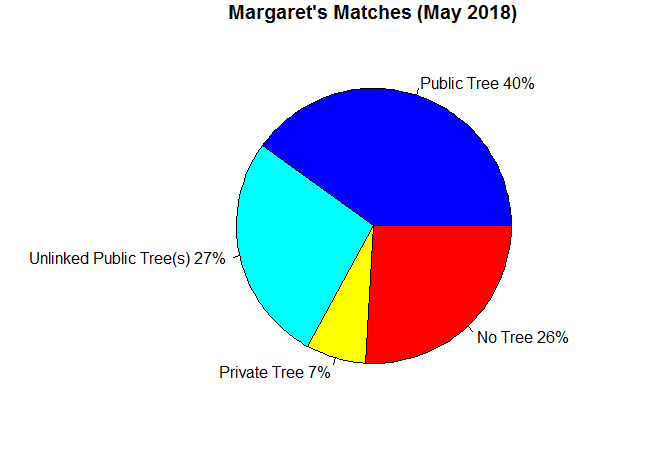 The headline numbers don’t capture whether the tree is actually useful. Of the 67% of matches with an available tree, 11% have everybody set to living status, so their details are hidden. Just to be clear, that’s a rounded 8% of my total matches, which is a significant number and is close to the 9% of matches who have set their full tree to private.

I’ll discuss a more detailed assessment of the “usefulness” of trees in a separate post. Here, I will show some comparisons of the headline numbers with other Ancestry users who have conducted similar analysis.

Blaine Bettinger reported his breakdown in January 2017 based on a manual analysis of his top 500 matches. I think it’s a reasonable sample. Martin Abrams commented on Blaine’s posts with a manual survey of his top 200 matches. Here’s a side by side comparison of my numbers with the two gentlemen. My breakdown is remarkably similar to Martin Abram’s figures, while Blaine seems to have all the luck in terms of low “No Tree” matches.

I searched for other reported numbers, but others seem to be using the DnaGedcom utility for analysis and that excellent utility does not identify private versus unattached trees. I’ve put the technical details of my own method of analysis at the end of this blog post.

There is no particular conclusion to be drawn based on three people from separate time periods, other than a personal assessment as to whether Ancestry continues to be useful to me for my particular research interests. As new matches trickle in, if they become predominantly “No Tree” then that would be problematic.

There is a worry amongst genetic genealogy enthusiasts that Ancestry’s marketing focus on ethnicity reports is bringing in swathes of new matches with no interest in creating trees. Readers of prior posts may remember that I ran an analysis of all my matches on two prior occasions including June 2017. Unfortunately I wasn’t capturing tree information at those times. I do intend to repeat the snapshot in August and beyond so I will start to get trends within my own data.

My own utility identifies private trees with a simple text search for Ancestry’s phrasing on the Match page: “family tree is private”.

For unlinked trees, there is a drop down list box on the Match page inviting you to select a tree from a list. Even if the list only has one tree, the list box is present: this allows me to identify matches with unlinked tree(s). My assumption here is that the listbox will not include any private trees i.e. if the match only has an unlinked private tree, that Ancestry will display their status identically to the “No Tree” people. I’m open to correction here!