This post follows on from my May 2018 analysis of the rate of growth of my DNA matches on Ancestry between July 2017 and May 2018. I took another snapshot of all my DNA matches in August 2018. I’m interested in capturing:

See the earlier post for background on the technical aspects. Here I’ll just dive into the numbers.

(1) THE RATE OF GROWTH OF MATCHES

The time intervals aren’t exactly similar between Feb->May and May->August but close enough to say that the rate of growth is fairly even: 17% and 15% respectively.

(2) THE DISTRIBUTION OF MATCHES BY SHARED CM

Here are the raw numbers: 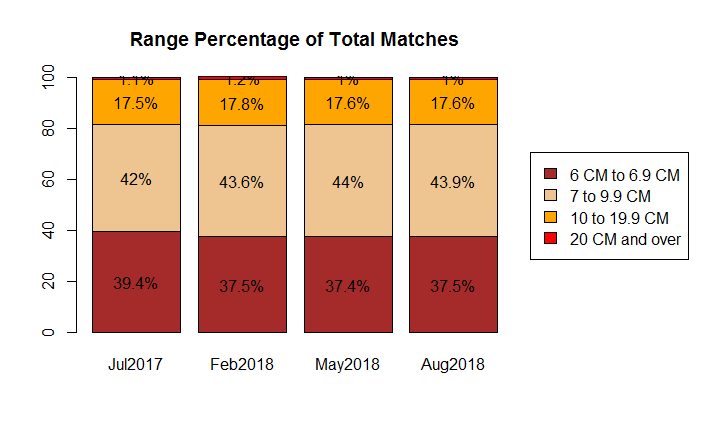 (3) TRENDS IN THE NUMBER OF OPT-OUTS/REMOVALS

In late April of this year, a wave of publicity arose from the use by the FBI of Gedmatch (a DNA matching site) to help catch the “Golden State Killer”. There’s a great round-up of links on the Cruwys blog.

There has been speculation in the DNA genealogical world that the publicity of outside agencies using our DNA might lead to people using the opt-out function in Ancestry, or remove their DNA entirely. I have no accurate way of measuring opt-out rates using snapshots in time, as I can’t capture new testers who immediately opt out. But I’ll take a look at the figures I have to hand.

My May snapshot was taken mid-month, and in a prior post on Ancestry opt-outs I noted that two matches disappeared between my February and May snapshots. Before that, five matches had disappeared some time between July 2017 and February 2018.

Between Mid-May and Mid-August, a total of 9 matches have disappered from my list. Just to be clear, these are matches that were present in mid May and are no longer available to me. I have no way of measuring matches who signed up in June and opted out in July or on the day their results came through.

Of these nine people, three had linked their DNA to family trees so its a pity to lose them. You’d think this trio weren’t people who were only interested in ethnic heritage and hadn’t realized that matching existed.

So 9 losses in the past three months is of course more than 2 in the prior three months. Not enough to worry me, but I’ll be keeping an eye on the numbers.