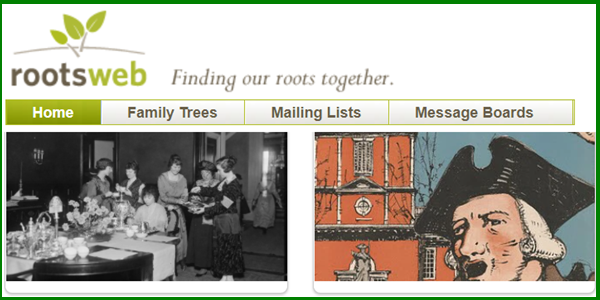 RootsWeb has had a checkered history under Ancestry since the genealogy giant purchased the company back in 2000. Ancestry said at the time that access to the RootsWeb site would always be free, and they’ve been true to their word. But the free site and services are far less active and useful than they once were.

This article takes a look at what features are still available on RootsWeb since it became a subsidiary of Ancestry. There are still parts of RootsWeb that are worth reviewing when researching your family tree. But how long will Ancestry keep the lights on?

RootsWeb evolved into a free online community of message boards, mailing lists, genealogy websites, and family trees. It was bought by Ancestry in 2000 and has slowly lost features. Mailing lists ceased in 2020.

Which Features on RootsWeb Are Still Active?

As you scour the internet for tools to use in your family research, you’re going to come across references to sources and services that haven’t aged gracefully! Some will link to broken URLs. Some will talk about strange entities like bulletin boards, Usenet, and ROOTS-L. Huh?

This was the dawn of the internet, young Padawan. An ancient time when genealogy enthusiasts like you listened to their home phone lines beep and whistle their way to a connection to genealogy treasures online. RootsWeb started in the mid-nineties as a provider of hosting for family research interests. Over time, it hosted many different but interrelated genealogy services. I’ll go through the ones I know about here, and point out which are still available to use.

Here is a summary.

Drop me a comment if I’ve missed something useful.

Think of a list as a topic of interest. This could be “The O’Brien Surname”, or more widely “Shipping Passengers Arriving into New York in 1907”. You, as an interested researcher, would register with the List. Once subscribed, you would receive the content of all emails sent to the List. You might get each email, or a bundle of daily emails packaged up into one bulletin.

And if you sent an email to the List, your message would be bundled with other messages and sent out to every subscriber to the list. Are you thinking that it sounds like a honeypot for spammers? Well, it often was. And that would play its part in the origins of RootsWeb.

The RootsWeb Surname List was a searchable registry with over one million surname entries. Entries included contact details of people actively researching those names. This allowed people with common interests to communicate and collaborate.

The RootsWeb Surname List is pretty much where RootsWeb began. A genealogy hobbyist named Karen Isaacson began maintaining this increasingly popular List in 1989. Then in 1996, she and her husband Brian Leverich set up internet servers in their own home to host it. They registered RootsWeb.com as the domain to access the original repository.

The single giant Surname List is no longer available. Ancestry retired it in 2017.

Ironically, what started RootsWeb may have also pushed Ancestry towards viewing RootsWeb as more trouble than it’s worth. It was partly the cause of a security breach in 2017 that drew the kind of publicity that no online company wants.

A surname file was left exposed on a RootsWeb server. It had emails and passwords of RootsWeb customers. Ancestry dealt with the breach promptly when it became aware of the problem. This wouldn’t be the last time Ancestry and other DNA testing companies were vulnerable to hackers.

Apart from the monster List of Surnames, tens of thousands of other mailing lists have been hosted by RootsWeb.

Ancestry announced in early 2020 that they were discontinuing the functionality. Users can no longer send or receive emails via these lists. Many of the lists have moved elsewhere, but the Mailing List index on the site is still plentiful. The archives are still searchable at this point. That may not be the case forever!

Remember I mentioned that spamming mailing lists played a part in the origins of RootsWeb? In 1997, an enthusiast named Larry Stephens was hosting genealogy mailing lists using the mail server of Indiana University. A massive spammer attack flooded the lists and took down the university server. Not surprisingly, the college dons wanted rid of this problem.

The couple running RootsWeb stepped into the breach and migrated hundreds of lists to their personal server. As word got out of a free service (with optional donations), more and more genealogy societies and enthusiasts set up mailing lists on the RootsWeb host.

A “message board” is also known as an online forum. Think Reddit, if you’re under thirty.

When Ancestry bought RootsWeb, it already had several message boards of its own. There was a forum on the old (discontinued) FamilyHistory.com website, and Ancestry simply merged it with the RootsWeb boards.

Now, when you click on “Message Boards” on the RootsWeb main page – you jump straight over to the Ancestry site.

RootsWeb provided free hosting for genealogy groups to create their own websites. These are called FreePages and HomePages.

In my summary, I noted “Yes-ish, problematic” under the heading of whether the sites were still available.

Ancestry hasn’t taken down the free hosted sites. But the availability has yo-yoed up and down over the years. There have been sporadic outages for months at a time. Many sites have migrated elsewhere.

I don’t think you can create new sites, but I clicked on a few to find some interesting resources. Sadly, many haven’t been updated since the early noughties. Possibly because the website owners couldn’t get access to their sites.

The most catastrophic outage for RootsWeb started in December 2015. A hardware failure brought down the infrastructure. It took months for Ancestry to bring the sites back online. And when they did, they had to admit that some of the content had been lost.

“Regretfully, despite their best efforts, our teams were not able to retrieve all of the data associated with the site. Specifically, we were unable to retrieve content from FreePages added after the summer of 2015.”

This revealed that there were no usable backups for a considerable period of time.

RootsWeb started on servers in the mountain cabin of a couple of hobbyists. You wouldn’t be surprised at this kind of failure with an “amateur” set-up. But now we were fifteen years after the acquisition! A lot of genealogy bloggers are from a technical background and were unimpressed.

I’ll simply point out that every major company conducts periodic disaster recovery audits on its “important” servers and databases. I’ve done quite a few myself. My own take is that the RootsWeb infrastructure wasn’t in the “mission-critical” column for the Ancestry senior management.

The WorldConnect project was the brainchild of the late Randy Winch, who was heavily involved in the foundations of RootsWeb.

WorldConnect allows you to upload your family tree to the RootsWeb site, using a GEDCOM file. I found an old document with instructions on how you could also send your GEDOM in the mail!

Crucially, Winch ensured there was a search interface to facilitate searching across all uploaded family trees. When users found persons of interest, they could locate the tree owners’ email and send further queries.

The interface is still up and running, and Ancestry has left the repository intact. Indeed, you can still upload a GEDCOM.

I gave the search page a whirl with the details of an ancestor in my public family tree on Ancestry. The Search doesn’t seem to respect dates, as the results spanned centuries. But there were lots of results!

The Obituary Daily Times is a user-submitted listing of obituaries. RootsWeb doesn’t actually hold the obituaries themselves – the listing provides details of the source of the obituary. So your search might throw up an entry like this:

And you’ll know that you have to go find the Ambler Gazette of Pennsylvania.

Ancestry has also indexed this database within the Ancestry.com site, but only up as far as 2016.

USGenWeb – What’s There Is Still Available

The USGenWeb project was offered hosting by RootsWeb back in 1996. This was a massive collaborative project whereby individual counties within the United States had websites listing resources and repositories.

There are many sites still hosted on the RootsWeb servers. You’ll find them under the Web Sites menu, grouped by State.

However, when you click on them – many show something like this. There’s a placeholder page telling you that the site has moved elsewhere.

However, I found others that are still intact on RootsWeb. Jenkins County, Georgia, for example. This example illustrates a problem: the site hasn’t been updated since 2004. Of course, some of the links no longer work.

But some do. You’ll have to click around to dig out what nuggets can be found.

Ancestry and the Future of RootsWeb

When Ancestry purchased RootsWeb back in 2000, many members were fearful for the future. Many predicted that Ancestry would move all user-submitted content to within the Ancestry.com paid subscription model, and shut the infrastructure down. They haven’t done that to date.

But nor have they invested in upgrading the RootsWeb site alongside changes to Ancestry.com. They’ve shut down maintenance of the Mailing Lists, which I figure was the main cost in terms of resources.

If I was a betting woman (which I’m not), I’d place money on GEDCOM processing being the next feature to be nixed. By that, I mean taking away the ability to upload family trees through GEDCOM files.

What about the static archives? All those messages and family trees taking up server space? Well, disk space is cheap. But the tech teams still have to keep the servers secure. That means continual additions of security patches, and sporadic upgrades to operating systems. Which in itself, doesn’t cost much.

But if the tech staff “miss a bit” – resulting in a security breach that must be disclosed publically – I think another one of those would end up badly for RootsWeb.

Keep Up To Date with Events

I’ll be keeping an eye out for any further developments (or shutdowns) with RootsWeb. This blog has a weekly newsletter with a roundup of articles that appear on our site.

2 thoughts on “Is RootsWeb Still Active? Will Ancestry Shut It Down?”