In Ireland, the “townland” is a small area of land supporting a number of households. The townland of Creeny (or Creeney) is in County Cavan. In 1901 there were six households in Creeny. This reduced to five in 1911. 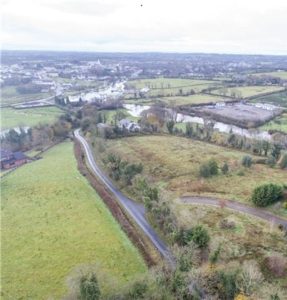 Two of the households have the surname of Gamble. Thomas and Mary Gamble sold their farm in 1920 and moved to the nearby town of Belturbet. They were my great grandparents, and I’m still trying to establish the precise relationship between the two Gamble families who were on neighbouring farms from at least the 1850s up to 1920.

My aunt told me the families were distant relations, but so far back that she didn’t know the common ancestry. So I built the Gamble line of both families as far back as Irish records allow, which unfortunately gets very sparse before the mid 1850s. I know that in 1855 there were two households headed respectively by John (my known ancestor) and Edward (ancestor of the “other” Gambles). Jump back to 1825 and there is only one Gamble in Creeny according to the tithe records: a Thomas Gamble. My guess was that John and Edward were the sons of Thomas, who subdivided his farm between them. But without paper evidence I’m stuck.

Enter DNA. Or the lack thereof.

I was very interested when I spotted the descendents of the “other” Gambles in a family tree on Ancestry. The owner of the tree told me that her brother had his DNA kit on Ancestry. I was crestfallen to find that he wasn’t in my DNA matches amongst the “5th-8th Cousins”. Does that mean there is no familial connection? That the proximity of two families of the same relatively unusual surname was by chance? No, not at all.

My theory is that her brother and I are descended from my great-great-great-great grandparents, so we would be fifth cousins. It just so happens that the Ancestry White Paper on DNA matching uses the example of 5th cousins to show clearly that some descendants at that distance may have matching segments, but some will not. This is due to the random nature of how DNA shifts around during transmission through the generations. The nicely illustrated example is in the early pages of the document and is worth a read.

The only conclusion that I can draw is that I can draw no conclusion from the absence of a DNA match at this distance. Of course, turning this on it’s head is more dispiriting. If the brother did have a small match to me, such as 6 CM, then it could also have been by chance.

In the case of the Gambles of Creeny, I personally attach weight to the family lore that the households were distant cousins. In rural areas it was important to keep track of such things. I’ve added the “other” Gambles to my family tree with a note that the connection is still speculation.

As an Amazon Associate we earn from qualifying purchases.  We are compensated for referring traffic and business to other companies.